History: She got a new green beyblade & she got the bit chip of Draciel from her parents that she use in the American Regional Tournament. Then it upgrade to Draciel Water Shield in the Chinese Tournament.  Edit

This beyblade is a defense type that hold all attacks

Book Series: In the Beyblade Elemental Force series, She use it against TJ's Dragoon Cyclone:E.Ws DG Cyclone in E.Ws Beyblade E.F Chapter Three: Arrived of an old friend, they battle in a special shop for beyblade & other things like Toy Hobby shop or store, during their first battle he lost to Katie's defense type bey. In E.Ws Beyblade E.F Chapter Four: Grand Star Beyblade Tournament battle, Katie have win the A Block preliminaries in the Beyblade American Regional / Grand Star Tournament in the Mercedes-Benz Superdome stadium from New Orleans, LA. At the first Semifinal battle, Katie battle against Ethan in E.Ws Beyblade E.F Chapter Five: The Water Light Black Turtle vs the Fire Water Red Phoenix, E.Ws Bey E.F chapter 5 battle in the third round, Katie found the bey bit piece with Light Aqua Genbu / Draciel in it then she put it on her bey to battle against Ethan's Dranzer Flare: E.Ws DZ Flare in the Special Double Decker Tower Stadium, but lost. In Rome, Italy, Katie challenge Enriches Tornan in the Colosseum and lose to Twin Amphil Dracor: E.Ws Ta Dracor, but got back up to beat with a new movements & technique of the Andromeda Constellation's nebula style whirlpool from E.Ws Beyblade E.F Chapter Thirteen: Katie vs Enriches full battle rumble.

Attack Ring - Turtle Smash Shield: It has four almost straight edged panels around it with a complete circle, separated in three places by points that are in the shape of a turtle's head. Because of this, it it not ideal for defense due to the amount of friction given off from the straight edged panels when spinning to wear down opponents using the three protrusions on each wing (which is neglable) and the slopes (which is the main focus of this AR).

Blade Base: Metal Ball SG Sharp - which gives the impression of it being out of date, but it is still a good defense type base in due to the additional weight that can be added to it. M.B.D comes with one set of metal balls that go inside of the BB & This is often considered the successor of the Metal Ball Sharp BB.The pointed tip allows for very little friction between the Beyblade and the Stadium surface which helps maintain high spin velocity.

When spinning rapidly, the metal balls in MBD's base roll up the ramps inside to a position closer to the outside of the blade. This gives a higher center of gravity and increased stability, due to a more uniform distribution of overall weight. As the blade slows down, the force of gravity overcomes the centrifugal force and the metal balls roll back down the ramps towards the center of the blade. This hampers balance and stability, but increases spin time.

Special Attack Moves:  Metal Ball Water Defense - This move allow Draciel Fort Shell to create an electronic water shield wall around it, so when a enemy come to it, they be electro shook in a sleep out.

Metal Ball Water Nebula Lightning Galaxy Defense - This version of Draciel Fort Shell, use the power of the Andromeda Constellation & it's Galaxy Nebula to surround the bey in a spiral shaped circle with Lightning water drop like chains.

This is the Defense combination of Draciel Metal Ball Defender & Master Draciel with a great power of defense. 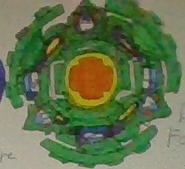 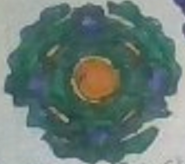 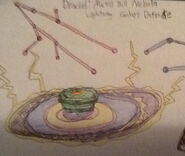 Add a photo to this gallery
Retrieved from "https://elemental-warriors-defenders-of-the-solar-system.fandom.com/wiki/Draciel_Fort_Shell?oldid=4401"
Community content is available under CC-BY-SA unless otherwise noted.