Dragoon Cyclone - is TJ / Warrior Earth Mars' second beyblade in the E.Ws beyblade series, It was build by TJ, Curtis Griffin, Steve, Shelby, & Raven. It was made after Dragoon Wind Attacker got destroyed by Ethan / Warrior Mercury Neptune's Dranzer Fire Changer and defeated it in a rematch in Chapter 2. When he saw the blue dragon spirit of wind and fire of his family that have enter his beyblade. Then it upgrade to Dragoon Storm Fantom in the Special American Battle Tournament on California to Arizona, Japanese & Russian Tournament.

Book Series: In E.Ws Beyblade E.F Chapter two: The Rise of the Fire Wind Blue Dragon Spirit, Dragoon & Dranzer both come out to battle each other than tie cause their equal strength.

In the Regional Tournament in America: Dragoon got some easy battle in the qualifier round in D Block, At the Semi-Final against Driger Spark was a rough one because Dragoon's Spin gear was split in four pieces, when TJ's bey got a Elemental Force Spin Gear inside, it unlock Dragoon's Elemental wind & fire power to master, the Fire Storm Attack on Driger's Wind Tiger Claw Attack in the E.Ws Beyblade E.F Chapter Six. At the Final, Dragoon Cyclone & Dranzer Flare were at the beystadium with fury powers. In the final moments, Dragoon Cyclone have win in E.Ws Beyblade E.F Chapter Seven.

As the Crusie Ship to the European World Championship: TJ meet Elbert Kongo in the game room, In the stadium Dragoon was going against a dual spin griffin type bey named Legend Griffin Destroyer in one, Dragoon lost big time in E.Ws Beyblade E.F Chapter Eight, Then TJ thought to channel the powers of the Pegasus constellation into his bey in the new launch technique, so he win the Greece Beyblade Battle Contest. In London, England's London Stadium for the World championship to battle Elbert Kongo & Legend Griffin Destroyer for payback with the new technique and channel the powers of both armor & constellation into his bey to finish it in full power from E.Ws Beyblade E.F Chapter Sixteen: Slaying the Elemental Gravity Wind Griffin.

In the Chinese World Championship: in the third battle round, TJ & Rio Han Wong were battle in a stadium that build half desert & half rocky canyon. During the battle TJ figure how to beat him in a areas with sand & rocks in it, then he use his Dragoon's Fire Storm Attack to turn the sand into a glass shaped tornado jar to stop Rio Han Wang's Thunder Lion Black Lightning  from spinning. At the final third match in the third round, Dragoon and Thunder Lion use their full powers as the beys fly off from the stadium for a tie.

Weight Disk: Wide - Wide, also known as Six Wide, is a very wide Weight Disk. A six-sided version at that, which makes it resemble a hexagon.

Blade Base: Cyclone Grip Base - Cyclone Grip Base is a very big low and fast attack base with a extremely wide flat rubber tip. due to the rubber tip at the end of it. as its light frame and extreme speed make it one of the fastest moving BB’s of all time. 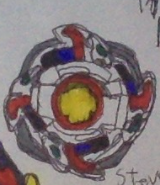 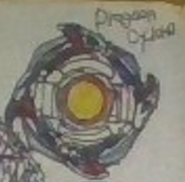 Add a photo to this gallery

Attack: Fire Storm Attack - It a move that allow Dragoon to create a fire storm to suck it's opponent into the a combination of fire & wind elements to spent it opponent' beyblade out of the stadium.

Chapter 4: Dragoon Cyclone vs Some other beys -

Retrieved from "https://elemental-warriors-defenders-of-the-solar-system.fandom.com/wiki/Dragoon_Cyclone?oldid=4414"
Community content is available under CC-BY-SA unless otherwise noted.