Dranzer Flare - is Ethan's second bey after Dranzer Fire Changer was upgrade, when it was beaten by TJ's Dragoon Cyclone in a rematch in chapter 2, then defeated in the finals. In the Russian Tournament Arc, It was evolve & upgrade to Dranzer Spiral Flame.

Book Series: It was evolve from E.Ws DZ Fire Changer / Dranzer Fire Changer after got some bad damage from E.Ws DG Cyclone / Dragoon Cyclone in E.Ws Beyblade E.F Chapter two: The Rise of the Fire Wind Blue Dragon spirit. In E.Ws Beyblade E.F Chapter Four: Grand Star Beyblade Tournament battle, during the Grand Star / American Regional Tournament, Ethan use this bey to beat Raven Mack, Angel Armstrong, & other player to win the C Block preliminaries to the semifinals. Then Dranzer Flare battle Draciel Fort Shell: E.Ws DC Fort Shell in the first semifinal from E.Ws Beyblade E.F Chapter Five: The Water Light Black Turtle vs the Fire Water Red Phoenix, and win to the final round for Ethan & TJ to face each other in E.Ws Beyblade E.F Chapter Seven: Going into the final battle ever.
In a castle mansion somewhere in London, England, E.Ws Bey Team, Elemental Bladers full with Sophera / Olivier Poland :E.Ws Sophera aka Olivier Poland full & Enriches Tornan meet Elbert Kongo: E.Ws Elbert Kongo & Johannes McGuire playing ckeckers, when Johannes saw Ethan's bey, he challenge him into a battle in a stadium inside a training dungeon room, where Ethan & Johannes battle each other. Dranzer Flare use it's aqua flame on E.Ws Ss Blaze: Sickle Salamai Blaze, but Ethan lost to Salamai Blaze's power in E.Ws Beyblade E.F Chapter Fourteen: Ethan against the gladiator of Glasgow, Johannes. Then he started training to beat Johannes with a little help of his friends. During the European World Beyblade Championship' second round, Dranzer combine it's Aqua fire elements with the Dragon Constellation, Draco's cosmic energy power for a new move: E.Ws Bey, Dranzer Fire Rising Dragon Flare Arrow on Salamai Blaze to win the battle and rematch from E.Ws Beyblade E.F Chapter Fifthteen: The Beginning of the European World Championship.

During the Elemental Blader's trip to Hong Kong, China. Ethan was following a little boy through the allery way to challange him into a beybattle, He name is E.Ws Kike Xian / Kike Xian & his bey, E.Ws Kike Xian's Swing Funk Monkey: Swing Funk Monkey in the stadium, Ethan use attack mode on his Dranzer against Funk Monkey, but Kike use his bey's move, the Monkey Funker Wacko strike to beat him in round 1, for second round, Ethan put Dranzer Flare on stamina mode to outpass Funk Monkey' special attack move to won it. But in the third round Ethan & Kike both use their Special Attack Moves at full powers at the same time, when an explosion burst out, the beys stop spinning.

Attack Ring: Cross Phoenix -  is a thin but well balanced AR, designed in circular shaped with four wings. Each wings are designed with a Smash Attack Point for This Attack Ring has two wings on either side that are designed for Smash Attack.

Blade Base: Flare Changer - When combined with Right SG (Free Shaft Version), the bottom of the base could be pushed for a metal sharp tip, or a plastic hole flat that can have two modes that is Attack Mode and Stamina Mode which is then followed by most of the [[Dranzer]] series. A [[Blade Base]] that can change from [[Attack]] mode into [[Stamina]] mode when it is hit. While it is in Attack mode, the [[Blade Base]] sharp tip will be retracted into the Blade Base leaving the flat surface as its tip in Attack Mode give it the aggressive and fast movement for Attack purposes. While in Stamina Mode, the sharp tip will be extracted from the Blade Base, giving it some decent [[Survival]]. Due to the perfect circular designed of this Blade Base

Special Attack Mode:  Fire Flare Arrow - When Dranzer Flare was send to the air, It create a fiery water shaped arrow as Dranzer fall back to the stadium & knock the opponents out from the Bey-stadium.

Fire Rising Dragon Flare Arrow - This is a special version of Dranzer Flare's attack, When the power of the Dragon Constellation, Draco is merge with it's power to make Watery Fire Dragon shaped arrow for maximum damage on the opponent for a stadium out. 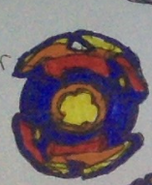 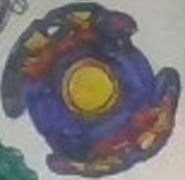 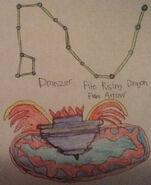 Add a photo to this gallery
Trivia & Notes:

Dranzer Flare is a combination of Dranzer Spiral & Dranzer Auto Balancer with a changing blade base from Attack to Stamina mode.

Retrieved from "https://elemental-warriors-defenders-of-the-solar-system.fandom.com/wiki/Dranzer_Flare?oldid=4400"
Community content is available under CC-BY-SA unless otherwise noted.